A plugin is a custom set of actions that can be added to your BotTalk scenario. Plugins can extend functionality or add new features to BotTalk. BotTalk plugins can be written in any programming language and integrate seamlessly with BotTalk using the Plugin Protocol.

In order to create you own BotTalk plugin you should have a basic understanding of any programming language and you should be able to run your own server.

Steps to Create a BotTalk Plugin

Since a plugin is a set of actions, a good place to design your own plugin will be to identify the actions you want to implement.

Use Case 1: Plugin as an API Wrapper

Say, you want to extend BotTalk with some features that will help you make requests to OpenWeather API. You could try using getUrl action for this of course. But you want to separate your business logic and scenario logic.

In your scenario you want to be able to use the current action to get the current weather for the selected city. So let’s take a look how this action might look like, when your plugin is finished:

As you can see we introduce the plugin using a namespace btopenweather (we’ll talk about namespaces more in Discover Process section). It is followed by the action name current that takes two parameters - city and units.

In the next action sendText you can see the use of three variables: btopenweather_temp, btopenweather_humidity, btopenweather_pressure. Those are the return values that our plugin provides. Once again you can identify the variables the plugin returns by the namespace btopenweather followed by the underscore.

Use Case 2: Extend JSON Response with a Plugin

Let’s go even further. What if you not only wanted to create a plugin as a way to conveniently wrap a third-party API with the BotTalk syntax? What if you wanted to introduce really new functionality? For instance, wouldn’t it be cool if your Google Action not only asked a user for a city, but also gave the visual clues - called suggestion chips: 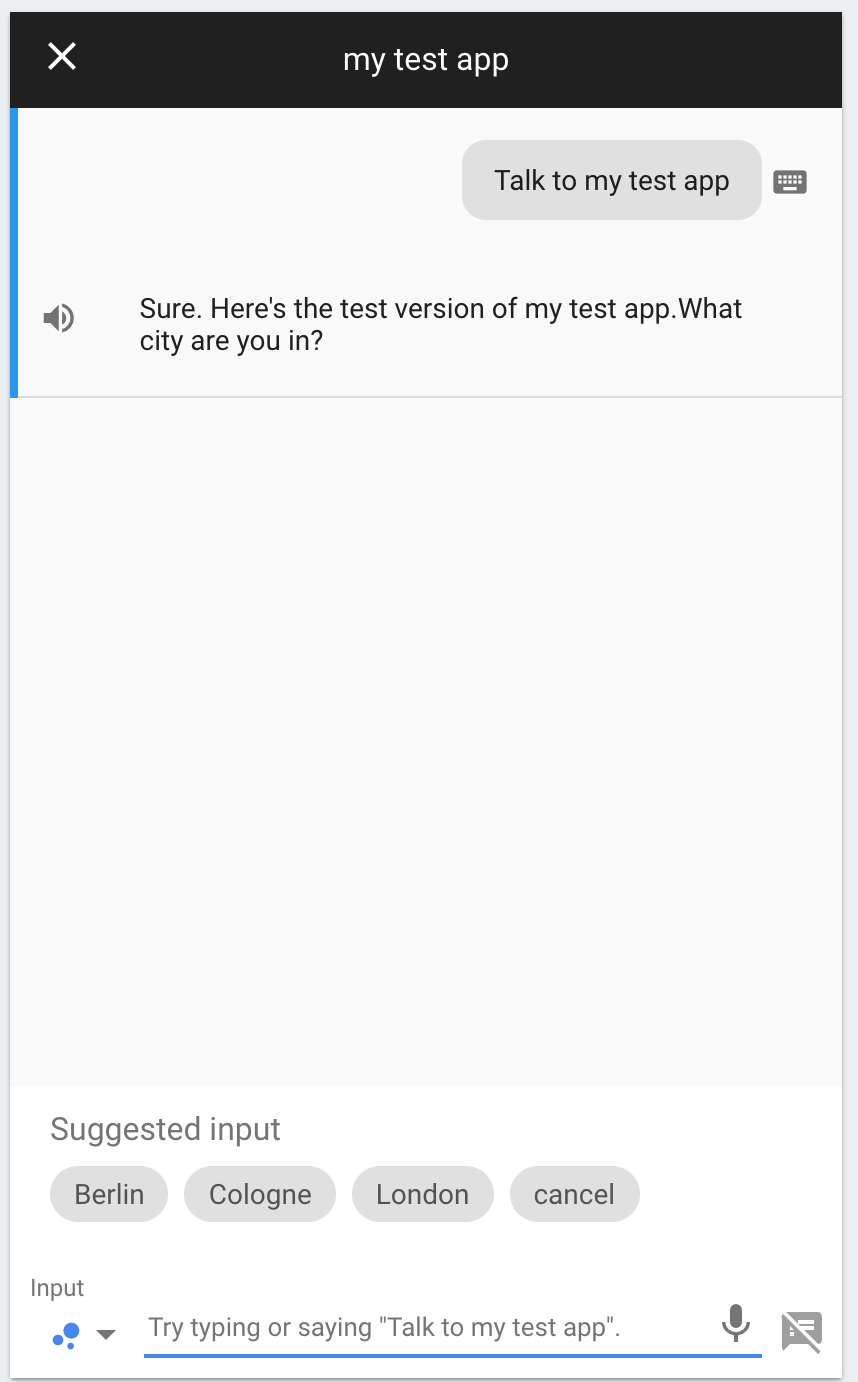 At the time of this writing, BotTalk does not support suggestion chips, so you decide to extend this functionality yourself!

You can directly see your plugin action by the namespace prefix btopenweather. The action takes one parameter cities, which is a list of cities you want to appear in Google Action as suggestion chips.

Use Case 3: Replace JSON Response with a Plugin

But it’s not all. Now that you’ve got the taste of real power that BotTalk plugins give you, you want to do something amazing: you want to send the complete payload to an assistant directly.

For example, you want to provide a specific output that only Echo Show devices with screen support - List Templates.

Before Plugins in order to do that you would have to abandon BotTalk completely and write everything from scratch on your server. But now you can easily let BotTalk do the hard parts - state management, dialog flow, sessions - and only do this one part - List Rendering - on your server.

Your plugin defines a new action list that only have one purpose - make a request to your server and return the complete json directly to the Echo Show of the user. As soon as BotTalk sees output: true - it knows all it has to do is just transfer your response to an assistant.

And yes, your plugin can also get an access to the whole request json from the assistant: just use input: true directive in your plugin action!

Now that you identified how your future plugin actions will look like in BotTalk scenarios, it’s time to define them in a Plugin Manifest.

Plugin Manifest is a json format that your server sends to BotTalk in order for it to identify what kind actions your plugin introduces, what parameters they need and what return values they might return.

Let’s take a look at the Plugin Manifest for our plugin:

Here is the Plugin Manifest schema for your reference:

Every time BotTalk meets your plugin action in the scenario it will make a POST request to the corresponding endpoint. Sending the parameters that you defined in the POST body.

Now that you have written your Plugin Manifest it’s time to add it to BotTalk.

You do that by opening the Plugins tab and clicking on the Create your own plugin button:

In this form you can give your plugin a name and provide a unique namespace that will identify your plugin actions. The URL endpoint of your plugin is the URL that BotTalk calls to get your Plugin Manifest (see the previous section). As a last parameter in the form you’re asked to provide a secret token. BotTalk will subscribe every request to your server endpoints with that token. It is your responsibility to check for this token on the server side.

After you fill in the form and send it the BotTalk will start the discovery process - meaning it will try getting you Plugin Manifest by calling the endpoint you’ve provided.

When the discovery is finished and your Plugin Manifest if validated, you will see you plugin in the plugin list. Including all the actions and parameters you have written in your manifest:

If you want to change your actions, add new ones, edit some parameters etc. - you can do so by editing your Plugin Manifest and then clicking on the Re-Discovery button.

Implement the Logic for Plugin Actions

Now that you defined the actions for your plugin and let the BotTalk discover your plugin, it’s time to actually implement the logic for you actions.

In this section we’ll only describe the json the endpoints should return in order for your actions to work. You can see the actual implementation in our GitHub Respository.

As we described before in our Plugin Manifest this action takes two parameters: city and units and returns the JSON object with the current weather conditions:

Just a reminder: BotTalk stores those values as context variables by prefixing them with your plugin’s namespace and underscore. So you can use them in your scenario like that:

For this action we need to do something more sophisticated on the server side. We need to tell the BotTalk to inject a certain object into the json response it will then send back to the assistant.

We do that by providing the following response:

So essentially we’re telling BotTalk that we want to inject our custom object containing suggestion chips into the following json key: payload.google.richResponse.suggestions.

You can learn more about the json structure of Google Action response for suggestion chips here.

Finally, our most ambitious goal was to replace the response BotTalk is sending to an assistant completely. Remember, we’re doing that in order to implement a custom List Rendering for Echo Show that BotTalk does not support (yet) out of the box.

We do that by taking the whole response json and packing it into the output key.

That’s how our plugin endpoint response will look like:

In you BotTalk scenario all you have to do is define output: true under this action:

This way the response your plugin’s endpoint provided will be sent to an assistant resulting in this beautiful list template on Echo Show: 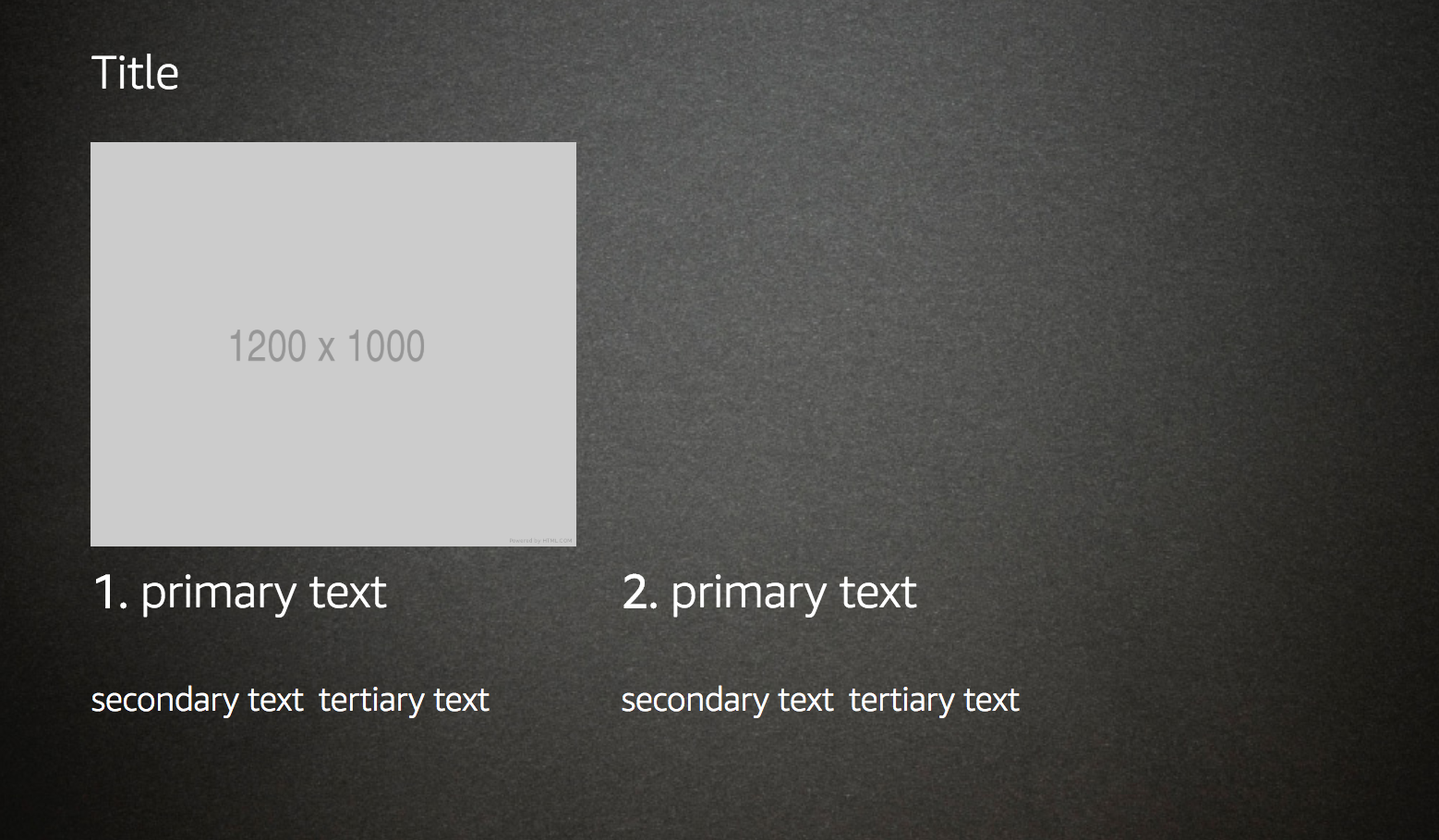